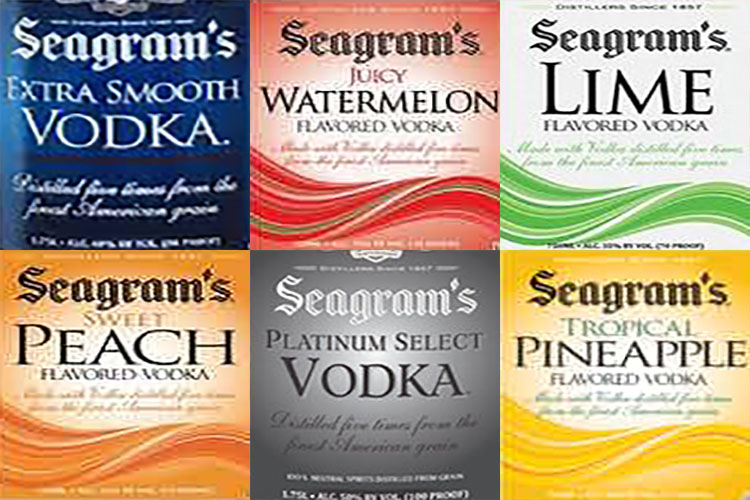 Before reviewing the Seagram's Vodka it self, lets have a look to the Vodka spirit itself. There are a variety of Vodkas and there is some discussion about where the Vodka comes from. The spirit originally could be found in Poland, Russia and Sweden. The drink contains mostly ethanol and water, and from the 19th century the most common Vodkas bring 40% of alcohol, but lately this minimum volume of alcohol has been regulated in the United State with a 40% minimum and in the EU with 37.5%.  Vodka was traditionally served without water, and in Finland, Iceland, Norway, Poland, Sweden, and in the former Soviet Union was common to saw it freezer chilled.

These days the spirit is extremely used as a base for cocktails, drinks and shots, and many brands release periodically bottled versions of them,being flavored varieties hugely popular. What is Vodka Made Out of

This widely famous drink from the Vodka belt is made from fermented cereal grains like corn, sorghum, wheat and rye or potatoes, but Vodkas made from wheat or rye are considered of superior quality. The result then is distilled until reach the final outcome that ranges between 30 and 40 percent alcohol by volume (ABV).

Lately it can be seen that the main raw material used in its production has been extended to the use of soybeans, grapes, molasses, and even rice. In the other hand, countries like Poland have vodkas that are made by only a mix of yeast and sugar.

Nowadays, it can be observed a lot controversy about what spirits are allowed to be called Vodka, but the group of the main producers of Vodka are firmly stand in their position that only spirits produced from grains, potato and sugar beet molasses using traditional methods of production should be denominated as Vodka.

Nevertheless the original Seagram’s company was Canadian with headquarter in Montreal, Quebec; their Vodka is made in the USA. At the beginning the distillery produced Canadian whisky and was based in Waterloo, Ontario, becoming the most important holder of spirits brands worldwide.

After a century, the company still shows a solid reputation of making high valued alcoholic beverages, especially Vodka, which is produced with local ingredients from the USA, like for example top notch American grain that is grown in Ohio, Kentucky and Indiana, where the raw material is processed at the Lawrenceburg distillery. This Vodka from Seagram’s shows a traditional flavor, but with special emphasis in the smoothness side of the spirit. If you want to have a clean and crispy drink, get this product is a good idea. Also it's inexpensive, and at this price the extra smooth is difficult to beat.

The product is 80 proof and is distilled to 95% ABV, and the water is added to get an ABV between 37,5% and 40%, depending on the final destination. These vodkas are filtered with charcoal.

Smoother than other products from the company, it is easy to drink and can be served mixed or simply straight.  The aroma of it, is quite neutral and the flavor at the end remind you a citric taste. The smoothness of Seagram’ vodkas come between other reasons, because the spirits are distilled 5 times. The latest version of the Seagram’s sweet tea Vodka is lighter in color and healthier, thanks to that the spirit comes with 20% less sugar. Also the company is using only natural ingredients which make it even better in the health department. You can feel some notes of cocoa and honey with a slight touch of caramel at the end.

The presence of the southern sweet tea with its refreshing and the appealing taste make this Vodka perfect to use it in drinks like for example the white gummy bear shot, which with our own version has been a great addition to our bar cocktails arsenal.

Nevertheless, the Seagram’s sweet tea is also nice to have it straight or on the rock, because its smoothness and lightness  makes it not aggressive to the palate. Always there are people who prefer the older version, but we think that Seagram’s added a good product to its always growing catalog.

Talking about the aroma, the sweet tea is dominant, which is helpful for people that are not fans of the alcohol smelt. The Seagram’s Peach Vodka is soft, fruity, and smooth, which combined with its refreshing effect make a nice drink for the summer time. When you open the bottle you will feel the aroma of the peaches instantly. Other feature of this Vodka from Seagram’s is that the spirit is five-times distilled before to be infused with peach flavor. Also, like the other flavor infused Vodkas from Seagram’s, it can be served straight, on the rocks, or in cocktails.

If you like fruity drinks, this Vodka is perfect for people that are not aficionados of making cocktails and don’t want to spend too much money. On the other hands, peach and other kind of Vodka recipes can be found very easily. The drink is not too sweet, but you have to be aware that is very carbonated, which is not so rare in these kinds of beverages. This is a full bodied Vodka which can be enjoyed straight, on the rock or mixed. The Seagram’s 100 Proof Platinum Vodka is a soft aroma spirit that goes down extra smoothly, without feeling the alcohol burnt in your mouth.

At the beginning this vodka feels peppery and the wheat presence is notorious. At the end the peppery feature is still present, but at this moment some notes of honey are added. The spirit comes from the excellent quality Seagram's Extra Smooth Vodka, and like its name says it is a 100 proof vodka that was thought to satisfy the more demanding Vodka drinkers.

As usual, like Vodkas made from Seagram’s, the select platinum uses grains from Indiana and mineral rich water as a raw material. The watermelon Vodka from Seagram’s is an energizing and fragrant contribution to the brand award winning wide offer. As usual this Vodka made from Seagram’s is distilled 5 times, and the raw material that is used in its production is high grade American grain.

Also, the product that was released following the presentation of the Golden Apricot and Ruby Red Grapefruit, shows the ability of the company to adapt to the times of increasing demand for fruit flavored liquors.

Even though the spirit can be easily consumed straight, the watermelon spirit is especially suitable to be used in fresh and summery cocktails.  The 35 percent volume Vodka is juicy, sweet and is also adequate for times in which fresh watermelon is not available, being able to be got it in any season of the year.

The smoothness also helps to avoid the negative effects of strong alcohol, like hangover or headache the next morning. With the release of the highly mixable Seagram’s Lime flavored Vodka, the brand continues to capitalize on the popularity of citrus flavors liquors. The product shows the flexibility of the Seagram’s Vodkas that can be enjoyed in refreshing cocktail, straight or simply on the rock. The cleanliness of this flavored Vodka is guaranteed by the 5 time distillation process which makes the result remarkably smooth and neat. With the support of the reputation of the Seagram’s Extra Smooth Vodka Double Gold Medal at the San Francisco World Spirits Competition and the reliable image and background of quality, these flavored spirits have enhanced the appeal that fans of the Vodka feel for them. The Lime Vodka from Seagram’s is also made in America using American grains and expertise. The Seagram's Grapefruit Ruby Red Vodka presents a marked citrusy flavor that combines nicely with lime zest, but also performed well when have it straight. The nature of these fruit flavored liquors also invites to be served mixed, and for instant this spirit is remarkably good. The product displays gallant and vibrant shades of grapefruit flavor and the alcohol smelt is disguised by its fruity aroma.

Also the drink is quite sugary, but at the end it feels neat and sharp for a short moment. Definitely this flavored Vodka is highly mixable and a nice addition to the bar for people that like refreshing and sweet cocktails.  The Grapefruit Ruby Red from Seagram’s is also distilled 5 times , and is made from premium grains from the USA. One of the firsts things that come in mind when thinking about the tropics are the variety of refreshing and vibrant fruits that come from there. There is no doubt that pineapple is the queen of them, thus the Seagram's Pineapple Vodka makes perfect sense.  Have it over ice, mixed or simply straight, fulfill all the expectations that tropical cocktail lovers have about these kinds of drinks.

For a hot summer day, the sweetness and savory notes of this Vodka are especially good, not only because is extra smooth, but the fact that is distilled many times makes it clean and refreshing. Also its smoothness makes it particularly adequate to use it in tropical cocktails or mix it for example with Sprite Zero.

This Vodka from Seagram’s is not excessively strong either, which is great for people that have a more lightweight and sensitive palate to alcohol flavor.

A good contribution for the fruit flavored Seagram’s Vodkas line. This Seagram’s Apple Vodka is smooth, sweet and refreshing fruit infused drink and is a great choice for summer cocktails. It is nice to drink it on the rock, in some cocktail like caramel apple vodka or simply mixed with some soda water or lemonade. Its smooth finish makes this spirit nice to be mixed with fruit juice in any flavor, but off course especially with apple juice.

The nice thing about this alcoholic beverage is that has somewhat an acid flavor that resembles of the just picked apples. Also the apple Vodka of Seagram’s is a versatile, clean and soft drink that is extremely popular between the Seagram’s fruit flavored Vodkas. The aroma is good and makes you feel fresh.

The apple savor conceal the alcohol aroma which makes it perfect to be served directly from the freezer, and the price is very reasonable for these kinds of spirits.

Sex on the beach cocktail: Another Classic Vodka based cocktail.

Bloody Mary: The classic of the classic Vodka cocktails.

Vodka Martini: The Vodka version of the old classic.

Raspberry & passion fruit martini: Another version of the immortal classic.

Eastern breeze: Vegan and healthier for the fitness conscious.

Caipiroska: The Vodka version of the famous Brazilian

Salted caramel pecan sour: Another new version of a classic.

Most of us know the brand Seagram's, but we think that many people didn't realize the variety of items that they produce,. The Seagram's Vodka line itself is a nice compilation of great traditional Vodkas and also fruit flavored infusion liquors. The company has shown in the past that their desire to extent the amounts of products is endless, thus we can expect that in the future will appear new spirits to make their offer even bigger.