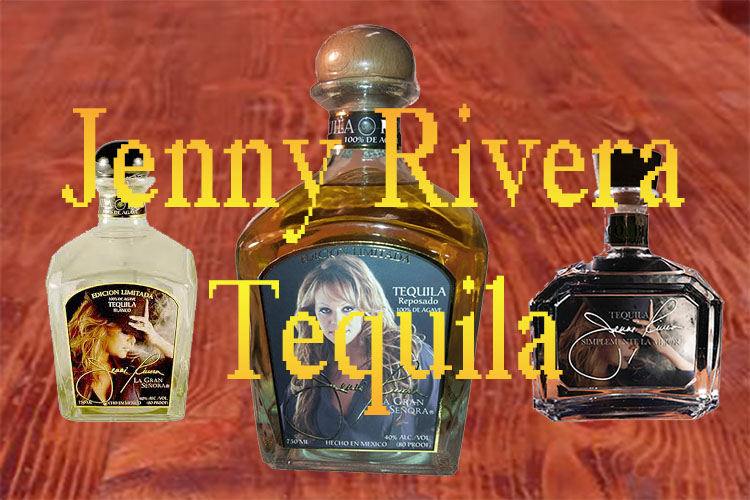 Everything started when in 2009, Jenni Rivera, known as “La Gran Señora”, thought about to release her own tequila. She begun to partner with 3 Crowns Distributors in order to, plan, taste, and develop the tequila that later was presented in 2013 as the La Gran Señora Tequila. Soon after the release her tequilas Blanco and Reposado were awarded Best in Class, and her Añejo version received the Añejo Gold award.

The Rivera’s spirit is made from Agave tequilana (frequently called in Mexico agave azul) which is an agave plant that is mainly found in the states of Jalisco, Colima, Nayarit and Aguascalientes. The crop is regarded as one of the most important economic income of the areas due to the worldwide popularity of the Tequila based drinks. The elevated amount of agavins (fructose sugars) that contains the plant is the reason why the Agave Tequilana is appropriate for the production of Tequila and other alcoholic beverages.

Talking about the Jenni Rivera Tequila itself, the drink shows a remarkable aroma with reminiscence of fruity and fresh agave shades that feels sweet and soft finishing with a touch of black pepper when sipping it.

The brand displays 3 products: Tequila Blanco, Reposado and Añejo which are presented elegantly and fine and their set makes a perfect gift for special occasions. The product is made from Tequilana Weber Agave plant, and comes from the central area of Jalisco. The extraction process is completed by roller mill, and its fermentation is done in stainless steel tanks. Beyond that, the raw material is 100% agave and distilled twice.

The spirit itself is a very smooth tequila which shows an array of flavors and subtle aromas like agave, vanilla, black pepper, and citrus. The softness of the amazing Jenni Rivera blanco is enhanced by the balanced palate feeling in its finish, giving notes of chocolate and fruits in its taste and sweetness as it touches your tongue. Its color is clear and neat, featured that is notably improved by the elegance of the bottle in which is presented.

Even though the drink is strong, the “Blanco” of Jenni Rivera feels smooth enough to be enjoyed in a glass filled with ice and garnished with a lime wedge.

The product is nice remembering of Jenni Rivera the Queen of Banda music. This Tequila is one of the best that we have tried lately. It has a smooth and a small bite which carry a great flavor at an affordable price that makes it a very good value product. The spirit is mild and easy to drink. With the right intensity of cooked agave the repo avoids an excessive influence. Without been a complex drink this Jenni Rivera’s Tequila is a nice alcoholic drink to use in your cocktails.

The presentation is awesome and the bottle looks exactly like in the photos. If you are a collector, it totally worth it to have it in your Collection, and if you are looking for a nice gift for Christmas or Valentine the Jenni Rivera Tequila Reposado nice bottle design will fulfill your expectations.

Needless to say that the Reposado is a must have for the many fans of the queen of the banda music.

Beyond that, this product is made from Tequilana Weber agave from central Jalisco, and is twice distilled in Stainless steel tanks. One of the best features of the Jenni Rivera Tequila Anejo is that even though it is strong doesn’t make you drunk unless you drink a big amount of these great Tequila from this brand. It is a tremendously smooth and really enjoyable anejo, especially when is served over a cube of ice and left for a minute or two to get chilled. Beyond that this spirit is  a very good tequila which goes down softly, and the awesome bottle in which is stored makes that its presentation looks superb.

Also the price makes it a great value product, because if you want to get a Tequila as smooth as the Anejo from Jenni Rivera you have to spent much more money. Surprisingly for a Tequila in this range of prices it is not necessary to have it with lemon or salt to avoid to burn your mouth.

The flavor is neat and brittle and with its vanilla and honey flavor completed with caramel and woody aroma, even people that are not used to drink these kinds of spirit are able to sip it. The finish is long life peppery taste with a subtle touch of agave. The Jenni Rivera limited editions are bottles that normally are demanded by collectors. The spirit is 100% agave and the one that is made in Mexico are the most valued and its significance is in the bottle itself and not in its contents. Normally for these articles to have value it requires that the bottle has not been opened and it is not widely available. These requirements makes that the products show a considerable higher value that the current retail price of the alcohol in the bottle.

There are several limited edition made inspired in the figure of Jenny like colognes, perfumes, clothes, and off course multiple items of the Tequila brand.  A special mention deserves the converse sneakers that used the singer name, the jenni’s BeBella Cosmetics line and the Jenni Rivera palette, which includes 6 warm-toned blush shades and 30 eyeshadows especially picked by Jenni Rivera and BH Cosmetics. Tequila sets are a great gift for the holidays especially for the New Year eve, and a Jenni Rivera Gift set is not the exception. These excellent sets are normally compounded by three of the best Jenni Rivera Tequilas: Jenni Rivera Anejo, Jenni Rivera Reposado and Jenni Rivera Blanco.  All 3 bottles have a magnificent look and each tequila has a smooth taste going down really pleasantly.

Even though the three Tequilas are different all of them feel satisfying, and are great illustration of the three traditional kinds of tequila. Also they show the habitual agave taste that comes with the products of this brand.

Also it is necessary to bring up the awesome and beautiful bottles that are included in this set, which with the amazing background pictures and nice design makes a combo that every big fan of Jenni Rivera would have no regrets of having them in their collection as a remarkable decoration pieces. These days Tequila is all over the place, not like back in the day that used to be drunk only by university students and more adventurous cocktail lovers. The spirit enjoyed its popularity not only by the great flavor, but also because its low level of calories. Besides, pure agave Tequilas like the Jenni Rivera are low in sugar, and lack in carbohydrates, thus as an alcoholic drink it’s a better option that many others.

But  no matter what some people say, Tequila is not a health drink and isn’t going to strengthen your bones or help you to lose weight. Even though, there are some studies that show potential health benefits of the sugars contained in the agave plant (agavins), the drink itself doesn’t show the aforementioned features due that the properties that make Agave tequilana potentially useful loose their characteristics when the raw material is distilled into tequila.

Nevertheless, Tequila calories and its low sugar contents make it better than other booze exponent. Special note for the Tequila blanco which is the cleanest, because it is widely accepted that blanco tequilas made from 100% agave are the cleaner than mixed or reposados which normally contain other types of sugars.

Other positive feature of Tequila is that it does not have gluten, thus there is no hint of any grain that include gluten.

Bottom line, the Jenny Tequila calories are 69 per ounce, which when talking about alcoholic drinks is a really reasonable amount. With the increasing attention that Tequila have had in recent years, and the most exciting  bottles designs, the Mexican liquor have shown increasingly elevated prices, but in the meantime people sometimes tend to forget the quality budget tequilas that come at awesome good values. Even is possible to find some that are made in the old fashion way, meaning that processes and raw materials like 100% blue Weber agave is used, and methods like stone crushing and oven cooking are still present in the elaboration of these great affordable Tequilas. There are some of them that use updated technologies like for example diffusers and autoclaves, but still are at an excellent quality/ price ratio
The price of these tasty spirit is affected by several factors, and the most important is that Tequila by requirement needs to be made from blue agave, which limits the production of it, resulting lately in an increment of 600% of the production costs.

Besides, the agave harvesting process is still a very manual practice that is transmitted generation to generation and automation has not arrived yet to the process. These make the labor cost be a factor that make the agave raw material an expensive one, due to the specialized and numerous amount of people that is necessary to complete the job.

Many people ask where to buy Jenni Rivera Tequila near me, but nowadays order online is much easier and budget friendly that think where can i buy jenni rivera tequila, Online retail stores are very popular these days and shops like Old Town Tequila can easily provide you with this popular Tequila For Jenni her life in music started in 1992 when she made a record as a gift for Father's Day for her father. Later on she continued recording and made a contract with the Latin division of Emi Capitol house. Then in 1995 she produced her first album Chacalosa which means party girl in Mexican informal language.

Back in the day, the denominated regional Mexican music scene was leaded and very crowded by mostly men, but no matter that even though her beginning in the show business was tough, overtime she achieved to conquer the popular Mexican music regional genre.

At the end of the decade of the 90s Rivera made a new deal with Sony Music and soon after with Fonovisa Records which released her album with “Que Me Entierren Con la Banda” in which appeared the successful song "Las Malandrinas" which she dedicated to her female fanatics.

The 2001 productions of “Se las Voy a Dar a Otro” and “Dejate Amar” which were her firsts records nominated to the Latin Grammy for best banda album.

Her 2004 compilation named “Simplemente … la Mejor” turned out to be the record that triggered her appearance in the charts of the USA.

Parrandera, Rebelde y Atrevida of 2005, was the release that makes her to achieve more consistently the firsts positions in the charts, with a peak at No. 10 on the Billboard Top Latin Albums chart and a double-platinum in the Latin section of the RIAA (Recording Industry Association of America).

Also another song from the album, "De Contrabando", was the only Jenni’s released that hit the number one song of the Latin Regional Mexican Airplay in the United States in those days.

The legacy of Jenni is a huge loss and her death was and  still is an incredibly loss for the lovers of the Mexican and Latin music.

The Jenni Rivera Tequila is something that most of their fans consider like one more of the things that she left for them.